Software-as-a-service (SaaS) stocks can be quite lucrative investments. The business model is subscription-based, which keeps customers paying monthly fees. Because the software often becomes integral to the operations of organizations that use it, customers are likely to stick with the providers they sign with, and expand their business with them over time. Also, software has minimal costs for physical production and distribution, allowing these companies to operate with high gross margins. 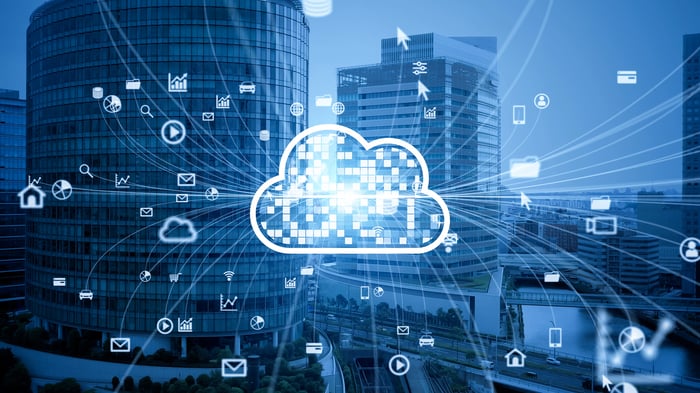 This Canadian e-commerce giant provides businesses with an online presence. With options well-priced for businesses of any size, Shopify provides even the humblest start-ups with an affordable way to reach customers across the internet. It also provides marketing and payment processing tools.

According to eMarketer, Shopify’s platform facilitated the second-largest share of U.S. e-commerce sales last year — behind only Amazon, and ahead of even huge retailers like Walmart or marketplace operators like eBay.

While it’s still far behind Amazon in terms of market share, during the third quarter, Shopify grew its revenue by 46% as its gross merchandise volume (GMV) grew by 35% to $41.8 billion. Additionally, it has more than $7.5 billion of cash on its balance sheet — money it can put to work growing its operations.

Shopify has been a remarkable stock over the last five years, up over 3,500%. Yet, management expects its GMV to increase faster than commerce Q4 commerce in general. It also has long-term goals to create a fulfillment network and develop a business-to-business platform. With ambitious expansion plans and growth ahead, every growth investor should consider owning Shopify.

Procore’s SaaS offering targets the construction industry. It allows owners, contractors, and sub-contractors to connect with each other and gather all the information about a project in a single location. Construction is one of the last industries to join the SaaS revolution and Procore is leading the way.

Its revenue grew at a solid 30% rate in Q3 to $132 million, and it produced free cash flow of $6.5 million. Unlike many SaaS companies, Procore is not putting its focus on expanding as quickly as possible. Instead, it lets customers find its platform organically. It does this by letting paying customers add non-paying users to a project. After those businesses realize the benefits of managing projects with Procore, they are more likely to join up and become paying customers.

Procore is at a much earlier stage of its growth than Shopify; it believes it has captured 2% of its potential customers, and less than half of its current customers subscribe to four or more of its 13 products. Its worldwide expansion is progressing; Procore will begin operating in France and Germany next year, for example.

Autodesk (NASDAQ:ADSK) competes against Procore with its Construction Cloud product. However, Procore expects global construction spending to reach $14 trillion in 2025. As such, the construction management software space has plenty of room for multiple players. If it can channel even 5% of spending through its platform, Procore will be a successful investment.

With a large growth runway ahead, Procore is a great SaaS stock for the future.

If you’ve ever communicated with a business through text messages, chances are Twilio assisted with that. It provides application programming interfaces (APIs) so businesses can build communication tools without needing their own software engineers. It features a usage-based pricing model that generates more revenue for Twilio as its customers grow.

Twilio is growing the fastest of these three companies, with Q3 revenue up 65% year over year. It also has an impressive revenue net expansion rate of 131%, meaning existing customers spent 31% more in the quarter than in the prior-year period. And while some of Twilio’s growth did come via acquiring companies, its organic growth rate sits at a still-impressive 38%. Concentration risk is being reduced as only 11% of total revenue is attributed to its top 10 accounts down from 14% during Q3 last year.

Businesses’ desire and need to communicate with customers will only increase, and Twilio is making that easier for them. Management is committed to achieving organic growth of 30% or more annually over the next three years, which would increase its revenue to more than $5.5 billion using Q3 trailing-twelve-month revenue.

Twilio shows no signs of slowing down and investors should take note.

With all three of these stocks, valuation is a concern. While Twilio and Procore stock’s price-to-sales ratio has recently come down, Shopify’s has remained fairly steady. Shopify is also valued higher than the other two because the market believes its e-commerce opportunity is massive. Even at these levels, valuation still represents a potential investment risk. However, each deserves a high multiple because of strong execution and future expectations. Should one of the companies begin failing, the valuation will fall to reflect forward sentiment. Exciting growth prospects often come with valuation risks, and it’s up to the companies to fulfill their long-term promise. 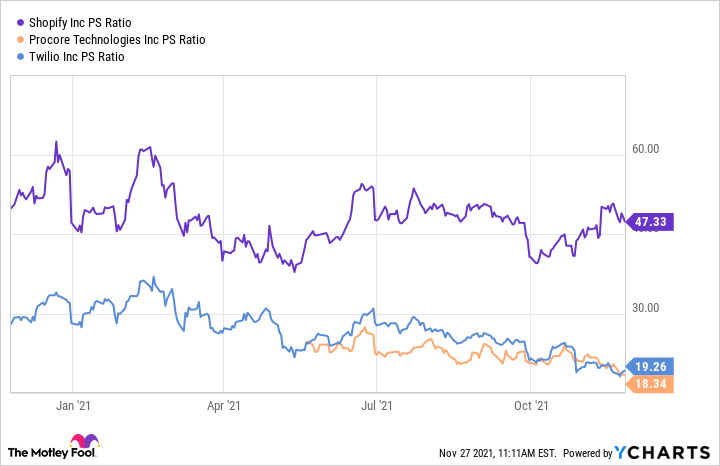 As the world becomes more connected, SaaS offerings provide businesses with powerful tools they can use to increase their effectiveness and productivity. Wise investors should consider purchasing all three of these stocks but must beware of the risks. Holding onto these stocks looks like a great way to beat the market over the long term.

NASA upgrades its asteroid hazard software to use sunlight

14 hours ago John A. Ratliff

NASA upgrades its asteroid hazard software to use sunlight

14 hours ago John A. Ratliff

This website uses cookies to improve your experience while you navigate through the website. Out of these cookies, the cookies that are categorized as necessary are stored on your browser as they are essential for the working of basic functionalities of the website. We also use third-party cookies that help us analyze and understand how you use this website. These cookies will be stored in your browser only with your consent. You also have the option to opt-out of these cookies. But opting out of some of these cookies may have an effect on your browsing experience.
Necessary Always Enabled
Necessary cookies are absolutely essential for the website to function properly. This category only includes cookies that ensures basic functionalities and security features of the website. These cookies do not store any personal information.
Non-necessary
Any cookies that may not be particularly necessary for the website to function and is used specifically to collect user personal data via analytics, ads, other embedded contents are termed as non-necessary cookies. It is mandatory to procure user consent prior to running these cookies on your website.
SAVE & ACCEPT