To put it lightly, it hasn’t been very smooth sailing in the market throughout 2022. We’ve witnessed double-digit valuation slashes occur within many of investors’ favorite stocks – primarily the high-flying growth and tech companies.

Skyrocketing energy prices, geopolitical issues, a hawkish Fed, and supply chain bottlenecks have all played spoilsport for companies throughout the quarter. Investors have had nowhere to hide, but it’s starting to look like the tide could soon change.

Nonetheless, the world keeps spinning, and companies continue to try to gain an edge over their competitors in any way possible. A big set of legendary rivals within the automotive world are Ford Motor Company F and General Motors GM.

The two companies have established themselves as two of the top players in the industry, potentially leaving investors a little confused as to which company would be the better investment moving forward.

In order to make a decision on which company deserves your cash more, we can look at recent price action, forecasted growth rates, recent earnings, and current valuation levels. Let’s take a look at which one of these giants takes the top spot.

It’s been a rough past year for General Motors GM shares. Down nearly 32%, the share performance doesn’t even come close to the general market. Shares started a steep downwards trajectory around the middle of January this year and have not been able to find and uphold a solid uptrend. Generally, strong price action tells us that many buyers are waiting to buy any pullbacks, but there have been none.

Valuation metrics have come back down to earth. GM’s current forward earnings multiple is sitting nicely at 5.3X, a fraction of its 2020 high of 22.9X and nicely below its median of 6.6X over the last five years. Additionally, it’s the lowest we’ve seen since late March 2020, and GM currently sports an A Style Score for Value.

Revenue forecasts look robust, but EPS estimates are penciling in bottom-line shrinkage. GM is forecasted to rake in a mighty $153.5 billion for the current year, a 21% increase from FY21’s revenue of $127 billion. For FY23, it’s the same story; sales are expected to climb 7% up to $163.8 billion.

The Zacks Consensus EPS Estimate for the current fiscal year sits at $6.89 per share, reflecting a notable 2.5% decline in earnings year-over-year. Looking ahead to next year, the $6.77 per share estimate displays yet again another decline in earnings of 6.7%. Additionally, the bottom line is forecasted to grow in the double-digits at 10% for the next three to five years. 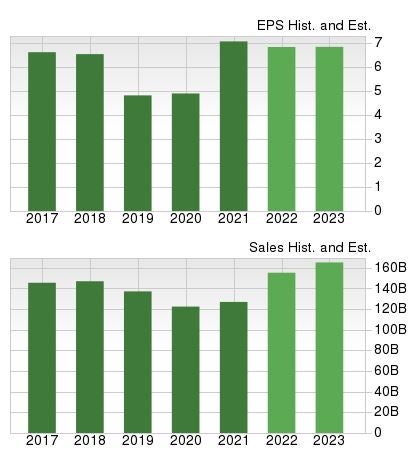 Over its last four quarterly reports, GM has acquired a stellar average EPS surprise of 25%, and in its latest quarter, the automotive giant scorched EPS estimates by 34%. In fact, beating EPS estimates is the norm for GM; the company has chained together 15 consecutive EPS beats dating back to September 2018.

Displaying a stark difference from GM shares, Ford F shares have done quite the opposite, gaining nearly 14% and easily outpacing the S&P 500. Shares enjoyed a colossal run starting in September 2021 that lasted until late January of this year, when shares took on a steep downtrend. Since then, sellers have had total control, but overall, the difference in price action between F and GM is quite telling.

Ford’s forward earnings multiple is a tad more expensive than General Motors’. The valuation metric sits at 6.8X, well below 2020 highs of 18.1X and a tick below its median of 7.2X over the last five years. Additionally, the value is sitting at levels not seen since March 2020. The auto giant sports a Style Score of an A for Value.

Ford’s top and bottom-line estimates are enough to make any investor’s mouth water. Ford is forecasted to rake in $146.4 billion for the current fiscal year compared to year-ago sales of $126.2 billion. Additionally, the top line is expected to expand by a further 5.3% in FY23.

The Zacks Consensus Estimate for current fiscal year earnings has Ford increasing its earnings by nearly 16% up to $1.92 per share. For FY23, the story remains the same; earnings are expected to grow by a solid 8.3%. Additionally, the company’s bottom line is forecasted to expand by 3% over the next three to five years, a much lower growth rate than GM. 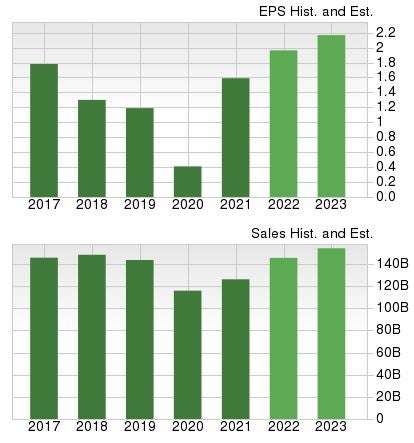 Ford has acquired a four-quarter trailing average EPS surprise of a whopping 65%, but the company missed the Zacks Consensus Estimate by 2.5% in its latest quarterly release. Additionally, the company has exceeded EPS estimates in six out of its last eight quarterly reports.

It’s a tough decision to make between these two auto giants, but one must come out on top. GM beats Ford out regarding valuation levels, long-term EPS growth, and has been more consistent in beating EPS estimates. On the other side, Ford shares have been much more potent, current and next year estimates display sizable increases in both the top and bottom-line, and Ford has a higher average EPS surprise over its last four quarters.

The two companies seem somewhat evenly matched, but the tipping point for me is that Ford has continued to reward shareholders with dividends. In contrast, due to pandemic worries, General Motors eliminated its dividend in Q2 of 2020. Dividends are a massive boost to any portfolio, and it displays Ford’s commitment to returning value to its shareholders. At this time, Ford looks like a better place to park your hard-earned cash.

From thousands of stocks, 5 Zacks experts each have chosen their favorite to skyrocket +100% or more in months to come. From those 5, Director of Research Sheraz Mian hand-picks one to have the most explosive upside of all.

It’s a little-known chemical company that’s up 65% over last year, yet still dirt cheap. With unrelenting demand, soaring 2022 earnings estimates, and $1.5 billion for repurchasing shares, retail investors could jump in at any time.

This company could rival or surpass other recent Zacks’ Stocks Set to Double like Boston Beer Company which shot up +143.0% in little more than 9 months and NVIDIA which boomed +175.9% in one year.