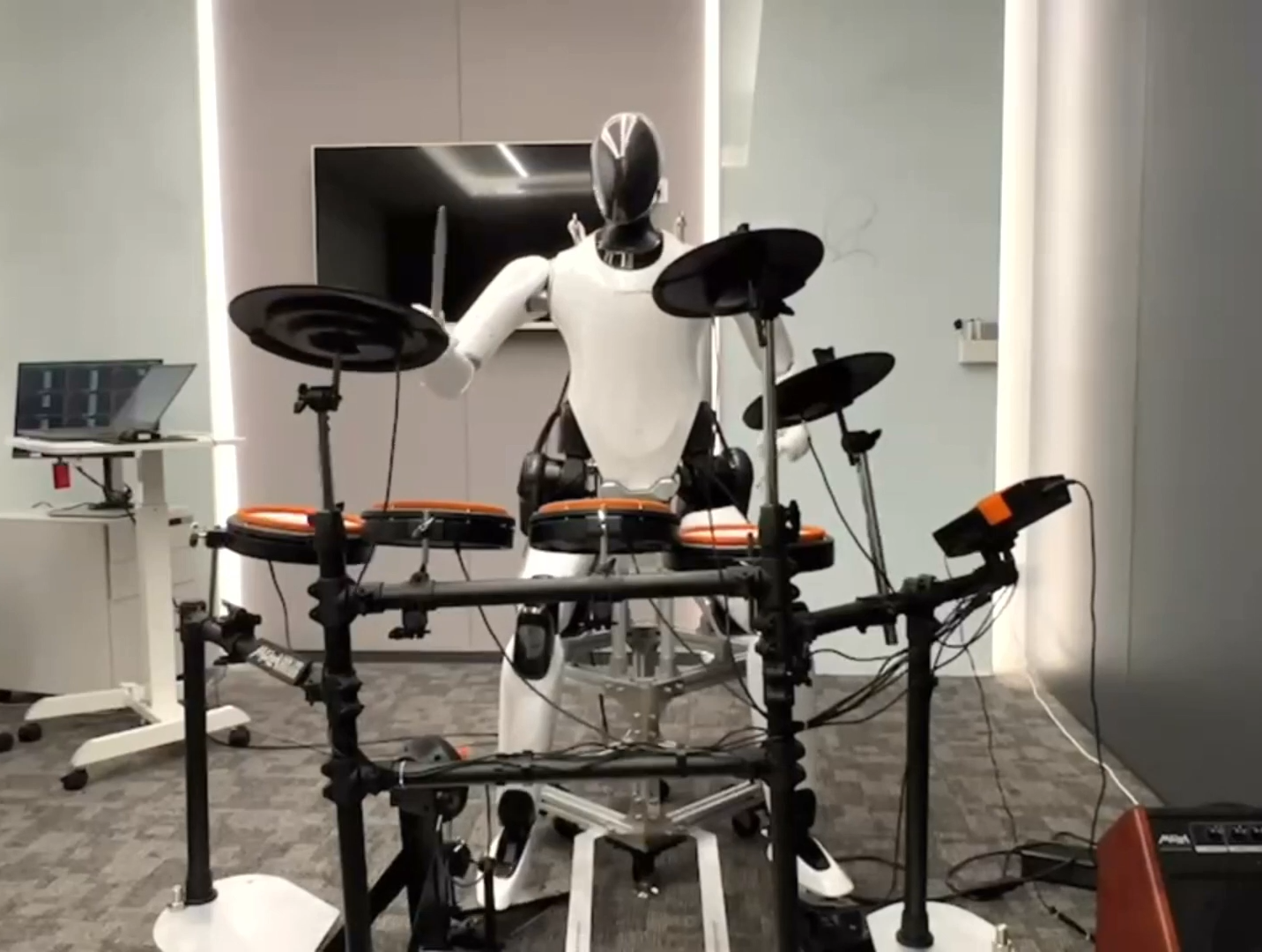 When Xiaomi announced its CyberOne humanoid robot a couple of months back, it wasn’t entirely clear what the company was actually going to do with the robot. Our guess was that rather than pretending that CyberOne was going to have some sort of practical purpose, Xiaomi would use it as a way of exploring possibilities with technology that may have useful applications elsewhere, but there were no explicit suggestions that there would be any actual research to come out of it. In a nice surprise, Xiaomi roboticists have taught the robot to do something that is, if not exactly useful, at least loud: to play the drums.

The input for this performance is a MIDI file, which the robot is able to parse into drum beats. It then generates song-length sequences of coordinated whole-body trajectories which are synchronized to the music, which is tricky because the end effectors have to make sure to actuate the drums exactly on the beat. CyberOne does a pretty decent job even when it’s going back and forth across the drum kit. This is perhaps not super cutting-edge humanoid research, but it’s still interesting to see what a company like Xiaomi has been up to. And to that end, we asked Zeyu Ren, a senior hardware engineer at the Xiaomi Robotics Lab, to answer a couple of questions for us.

IEEE Spectrum: So why is Xiaomi working on a humanoid robot, anyway?

Why did you choose drumming to demonstrate your research?

Ren: After the official release of Xiaomi CyberOne on August 11, we got a lot of feedback from the public who didn’t have a background in robotics. They are more interested in seeing humanoid robots doing things that humans cannot easily do. Honestly speaking, it’s pretty difficult to find such scenarios, since we know that the first prototype of CyberOne is far behind humans.

But one day, one of our engineers who had just begun to play drums suggested that drumming may be an exception. She thought that compared to rookie drummers, humanoid robots have more advantages in hand-foot coordinated motion and rhythmic control. We all thought it was a good idea, and drumming itself is super cool and interesting. So we choose drumming to demonstrate our research.

What was the most challenging part of this research?

Ren: The most challenging part of this research was that when receiving the long sequences of drum beats, CyberOne needs to assign sequences to each arm and leg and generate continuous collision-free whole-body trajectories within the hardware constraints. So, we extract the basic beats and build our drum beat motion trajectory library offline by optimization. Then, CyberOne can generate continuous trajectories consistent with any drum score. This approach gives more freedom to CyberOne playing drums, and is only limited by the robotics capability.

What different things do you hope that this research will help your robot do in the future?

Ren: Drumming requires CyberOne to coordinate whole-body motions to achieve a fast, accurate, and large range of movement. We first want to find the limit of our robot in terms of hardware and software to provide a reference for the next-generation design. Also, through this research, we have formed a complete set of automatic drumming methods for robots to perform different songs, and this experience also helps us to more quickly realize the development of other musical instruments to be played by robots.

What are you working on next?

Ren: We are working on the second generation of CyberOne, and hope to further improve its locomotion and manipulation ability. On the hardware level, we plan to add more degrees of freedom, integrate self-developed dexterous hands, and add more sensors. On the software level, more robust control algorithms for locomotion and vision will be developed.

Staying ahead of the curve: Warehouse Management Trends